Shock! Despite Super Bowl Chrysler Ad Clint Eastwood is not a Democrat. 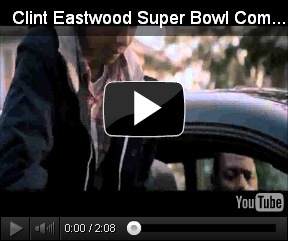 When analysing this ad it is important to remember that Clint Eastwood does not need need the money from doing the voice over for a car advertisement, indeed he has apparently donated his fee to charity. This begs the question, why did he do it?

It would be fair to assume that Mr Eastwood's agreement to doing the ad would have been conditional, clearly not on financial gain, but on his having a great deal of sway over the contents of the script. After all he is perhaps as well known now as a director as he is an actor.

However before we get carried away with over interpreting the politics of the ad we must take into account what Mr Eastwood has said. He expressly rules out any notion that the ad supports either political party, the incumbent President, or any of the Republican candidates for nomination.

Rather than Mr Eastwood's "political opinion" what we have here would be better described as his "opinion on US politics". Plain and simple the ad it is a call for co- operation in the face of adversity.

Oh and by the way, why not buy a Chrysler, they are made in the USA.

The second polybore look alike, the first being http://www.polybore.co.uk/2010/02/catherine-tate-sex-robot-modelled-on-or.html , again has a “Dr Who” connection.

This time it is Dot Cotton (on the left) and Davros (on the right). 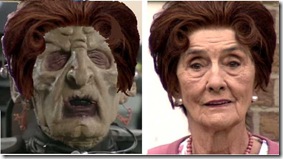 Posted by polybore at 9:50 AM No comments: