Does “David Cameron” Spell the End of the Conservative Party? 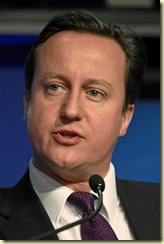 This image is licensed under a Creative Commons Attribution-ShareAlike 2.0 Generic License

Many Conservatives have been, lets say surprised, at the direction that their party, in coalition government, seems to be heading.

But perhaps they should not be surprised. David Cameron has never been very popular with Conservative stalwarts such as Margaret Thatcher or Norman Tebbit and the reason for this is that David Cameron is a centrist.

With the 1922 Committee emasculated, over a 100 starry eyed, star struck new Tory MP’s and 50 odd Liberal Democrats at his disposal David Cameron holds the whip hand over the right of his Parliamentary party.

How will Conservative activists in the Conservative heartlands react should very few, if any, of the policies that they hold most dear actually come to fruition?