It’s the Sun Wot’s Lost It

Not the election who knows what will happen there, no, The Sun has just lost it, period, the “it” being it’s political nous.

When The Sun jumped the New Labour ship for the David Cameron band wagon back in October 2009, a Conservative landslide victory seemed certain, The Sun must have felt confident that they would once again have the satisfaction of backing the winning team in the same way as when when they switched from Conservative to New Labour in 1997. Perhaps the Sun Political hacks were dusting off the their infamous headline from 1992 when they last supported the Conservatives during a General Election. 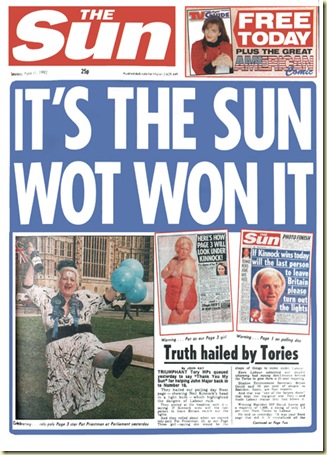 Wot they forgot in October 2009 is the old adage

“A week is a long time in politics”. (Harold Wilson.)

An adage from 1964 which, although still fundamentally true, is now showing it’s age. Today with TV debates and the internet perhaps we should now say that,

“An hour and a half is a long time in politics”

Bearing that in mind there is still time for the Conservatives to get their act together to scrape some sort of victory but if they can’t, and increasingly it looks ever more difficult, it’s not just the Tories who are going to look stupid. It’s going to be worse for The Sun, a fair weather friend and a friend of ever diminishing political significance. Who needs a friend like that?