The Hubble Telescope celebrates it’s 19th year since it’s blast off into space on the shuttle Discovery in 1990. 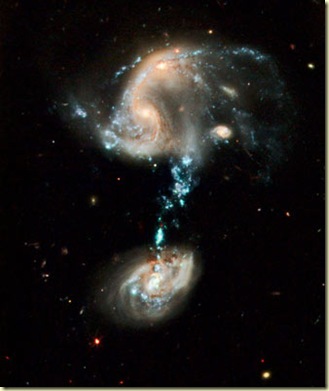 19 years of producing hundreds of incredible images like the one above. Happy Birthday indeed Hubble.

Hubble’s successor will be the The James Webb Space Telescope (not a very catchy name will we call it James?) is due to be launched in 2013. James will be put into a much higher distant orbit than Hubble and will use infrared allowing detection of the coldest objects and through dense dust clouds.

Hopefully the Hubble telescope will be able to be maintained until 2013 but with the shuttle fleet scheduled for decommissioning in 2010 there is some doubt. Hubble was designed for maintenance by shuttle and although robotic alternative solutions are in development there are no definite plans as yet.

Hubble has been an amazing success and every effort should be made to keep it operational for as long as possible. Every hour Hubble stays in service allows for ever more amazing discoveries.

hubblesite.org has to be the most amazing web site on the internet with hundreds of incredible images available for download. It is a must visit.

Our Galaxy the Milky Way Actually Tastes of Raspberry (not Milk). Primordial Soup tasted of Raspberry? 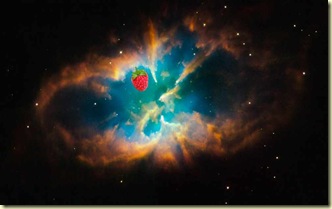 Ethyl formate, which tastes of raspberries, has been identified in space. Towards the centre source Sagittarius B2 to be precise.

It is easy to think of space as a cold lifeless vacuum but evidence from ongoing research is consistently demonstrating how even in the depths of space it is possible for complex organic chemistry to take place.

This latest discovery has identified an ester, ethyl formate (which tastes of raspberries and an alkyl cyanide, n-propyl cyanide (which does NOT taste of raspberries). These are the most complex molecules identified in space to date. In fact these molecule are so complex that they can be seen as a pointer that amino acids, the Holy Grail of this type of research, may be found in space.

Video adsense units have not been performing well and now Google is pulling the plug. It is a shame in a way because they could have worked if the implementation had been better.

As far as polybore could tell they were just a YouTube video unit with a contextual adsense ad on the player. Perhaps if the quality of the videos had been better and the publisher had been paid per video view rather than by click things would have worked out better.

Here is what Google says:

We're writing to let you know that we'll be retiring AdSense video units at the end of April. After reviewing this feature, we've found that it hasn't been performing as well as we had hoped, so we've decided to focus our efforts on other opportunities to help publishers monetise their sites.

We recommend that you begin removing the video unit code from your pages as soon as possible, to ensure that you can take advantage of the available ad space on your pages. At the end of April, any remaining Leaderboard or Skyscraper video units will begin directing users to YouTube.com, while other video unit sizes will automatically be changed to standard embedded YouTube players. These standard video players will display top YouTube videos, but you won't generate earnings from them once this change occurs.

If you'd still like to display free video content from YouTube, you can do so through YouTube.com directly: visit any specific video page for the embed code or sign in to your YouTube account to create a playlist. For more information about embedding YouTube videos, please visit http://www.google.com/support/youtube/bin/answer.py?answer=57788&hl=en_GB. Alternatively, if you have fewer than three ad units on your page, you may prefer to replace your video unit with a regular ad unit.

Although video units are being retired, other video offerings within AdSense aren't affected. Video ads may still appear on your pages and AdSense for video is still available for eligible publishers. If you'd like more information about the retiring of video units, please visit our Help Centre at https://www.google.com/adsense/support/bin/topic.py?topic=12182&hl=en_GB.

Thanks for your support of video units in the past, and we appreciate your patience and cooperation.

Posted by polybore at 6:26 AM No comments: 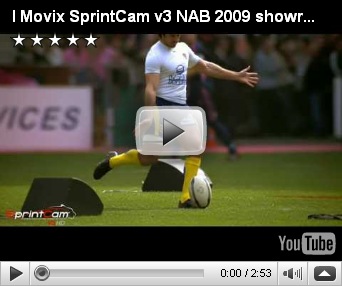 Produced by the new I-Movix SprintCam v3 HD. Who would have thought that 1000 frames per second could look so good.

The start of the video shows footage shot at the Rugby World Cup. Later in the video, perhaps the most amazing footage in the video can be seen, of a variety of falling and bouncing objects. Incredible.

The new camera is set to be shown off at NAB 2009. NAB is a major media industry event produced by the National Association of Broadcasters. http://www.nabshow.com/2009/eventInfo/about.asp

The I-Movix SprintCam v3 HD is sure to be a hit at NAB 2009 and will probably change how we see the action at televised sports events forever. In fact with this camera there is a lot of previously missed video detail that we will now be able to be amazed by.

The applications that this camera could be used for are countless, from industrial analysis to the study of animal behaviour. We can also look forward to some amazing sequences at the cinema once the camera is taken up by the movie industry. What a great bit of kit.

The wet cloth clings to the persons face and obstructs the prisoners breathing. 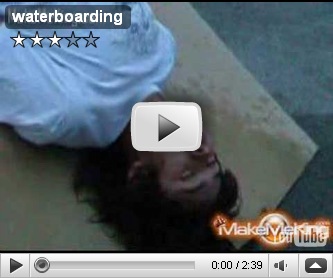 BlogCatalog’s malware incident was due to an unethical advertiser.

After ignored email and locked discussion threads finally polybore has a definitive answer as to why Google listed BlogCatalog as unsafe during the malware incident.

Previous posts on this:

The initial incident and polybore’s speculation on the cause:

The request of explaination:

Well polybore’s email to BC never received an answer however all became clear in an unrelated discussion on BC yesterday.

In reply to a question from codesucker about advertising on BC in a discussion TonyB (BlogCatalog team member) said:

“The ad problem was caused by one unethical advertiser. We now control all the tags and screen ads before they go up unless they come from google.”

You can see it here. Use find on page because it is a long thread.

All is finally explained and polybore’s speculation at the time has been vindicated. BC should have been much more open about what had happened in the first instance. What is more if they had taken polybore’s advice on board perhaps they could have avoided the whole incident. The key to effective communication is listening.

If you are looking for who won the quiz you can find out here.

The evidence trail is hot.

Search term “without the coupon it s called shoplifting”

Well it turns out that little Stevens Point is, just now, hosting it’s 40th Annual World's Largest Trivia contest, Trivia 40 http://www.90fmtrivia.org/ The trivia contest has a theme which changes each year, this time it is a Humphrey Bogart theme.

Stevens Point normally has a population of 24,000 people. But during the contest the population swells by up to 50%. This year the contest has 450 teams with about 12,000 players many having travelled from afar to take part. http://wcco.com/local/trivia.humphrey.bogart.2.983015.html

It is obvious that very many of these players has made sure that they have access to the internet and in particular Google. Naughty, naughty. Busted.

Here is looking at you Google!

Polybore suggests they change the image on their homepage to: 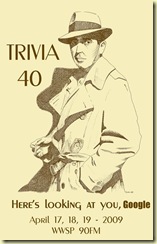