The Sun newspaper (UK) is running an “exclusive” story based on Sir Alan Sugar supposedly missing the BBC show “The Apprentice” in which he stars. The Sun writes:

“The hit BBC1 show was broadcast at 9pm, at the same time Jewish families across Britain were enjoying a traditional meal celebrating the religious festival of Passover.” 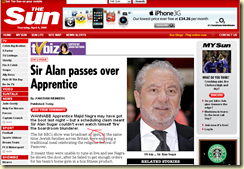 The BBC show is usually on at 9.00pm on a Wednesday night.

However if the Sun’s blundering hacks had bothered to watch the show or check the BBC schedule they would have seen that tonight's “The Apprentice” was on BBC2 at 7.00pm. 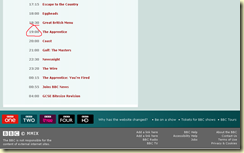 “The Apprentice” was rescheduled by the BBC to make way for The Masters golf tournament.

So in a bit of “The Apprentice” based fun polybore invites you to say “Your Fired!”. Who will it be, the journalist (Jonathan Weinberg), who put their name to this “story” or, the editor (Sara Nathan), who let it get published?

Polybore says: come on The Sun we expect better. You should give the credit crunched Polyobre a chance to write for you. Polybore can do better than that. 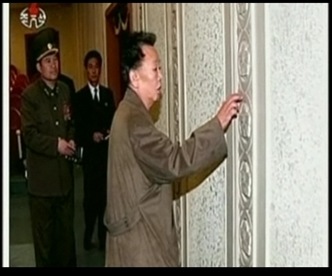 The recent N Korean missile firing story is something of a smoke screen to the real cause of concern regarding N Korea. Kim Jong Il "Dear Leader" will be dead soon. (going by the most recent pictures in weeks or less) so before long there will be a succession. Always dodgy moments successions no matter how well planned, especially bloodline successions where older siblings have missed out.

Posted by polybore at 1:11 AM No comments: