The Telegraph and The Times slur Sir Nicholas Winton with “Schindler” tag.

Today is the 70th anniversary of the journey of 669 Czech Jewish Children fleeing from Prague to London, in the weeks leading up to World War II, and was marked by a re- enactment.

Sir Nicholas Winton personally and in his spare time made the arrangements to save these children in September 1939. He found the children families to stay with in the UK and permission from the Home Office.

Sir Nicholas Winton has been dubbed “Britain’s Schindler” by some in the press and is a classic example of lazy and ignorant journalism. 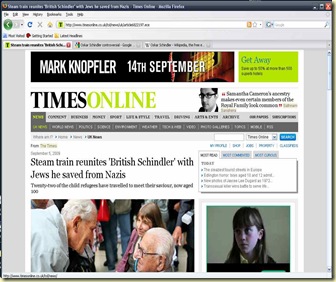 “Sir Nicholas Winton, the 'British Schindler', meets the Holocaust survivors he helped save” 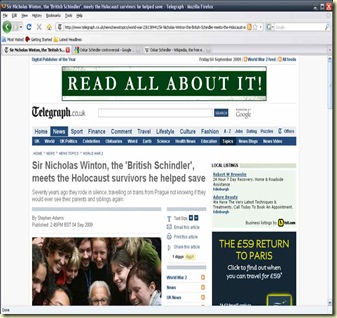 Oskar Schindler like Sir Nicholas Winton saved the lives of Jews but that is where any similarity stops.

Sir Nicholas Winton’s outstanding act of humanity is the action of a man, unquestionably, driven by the very best of motives. The same cannot be said for Oskar Schindler.

Oskar Schindler was a Nazi (member of the National Socialist German Workers Party) and had been a spy for the Nazis in Poland and Czechoslovakia. Schindler helped the Nazis prepare for their subsequent invasion of these countries. As Schindler was a Czechoslovakian citizen he was a traitor to his country and helped condemn millions to their deaths.

The Times, The Telegraph and any other media outlet using this description of Sir Nicholas Winton should apologise immediately.

Schindler, because of Spielberg's film, may be better known than other people who saved Jewish people from the Nazis. However, this does not mean that Schindler’s name can or should be used by the media as a generic term for those who have saved Jews because no one wants to be labelled with the name of a Nazi and a traitor. Albeit a Nazi and a traitor who belatedly found their humanity.