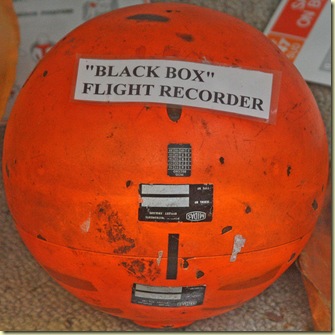 This image is licensed under a Creative Commons Licence.

The data held by black box flight recorders is essential for tracking down the causes of the loss or damage of an aircraft. This data is more vital today than ever because modern planes are fly by wire and therefore heavily dependant on electronics, data transmission and software.

Considering the high value of the data held by an aircraft’s black box (this data can save hundreds of lives) and the amount of time aircraft spend flying over deep ocean it is surprising that there is only one flight recorder and it is bolted to the airframe of the aircraft (usually the tail section which is most likely to survive impact). As the black box is attached to the air frame it is highly likely that it will end up on the sea bed.

Today’s black box is basically a hard drive albeit a hard drive encased in a specially designed high impact/ heat resistant orange shell. As well as the impact and possible fire the black box is designed to with stand deep sea pressure and is fitted with a location beacon that works underwater as well as on land for 30 days.

The current design features of the modern day black box are all to the good however any IT professional will be alarmed at the apparent lack of a backup of the data, in particular a back up black box on the exterior of the plane which can float to the surface in the event of the loss of an aircraft over deep water.

Despite the black box location beacon, the huge potential search area, especially so when in deep water, makes it incredibly difficult to locate a black box at depths in the thousands of meters and under the influence of strong deep sea currents.

The idea that the causes of this crash may never be fully understood is awful, detrimental to the future safety of the A320 fleet and worst of all terrible for the families of the deceased.

If Flight AF 447 had been fitted with a backup floating black box designed to separate from the airframe the probability of finding out what happened to the aircraft would be greatly increased.